Two of the most iconic locations outside of Florence are included in the San Gimignano and Siena guided tour.

The tour begins with a drive on a private 9 seats van with NCC license into the Tuscan countryside outside of Florence where you can admire the hills, vineyards and olive groves of Chianti.

San Gimignano is famous for its 13th-century towers, which symbolize the prosperity of its merchants. As we stroll the antique cobbled stone streets we admire the frescoes inside the Palazzo del Podestà patio, Duomo, and Piazza Cisterna.

There will be plenty of time for photos and shopping at both destinations for local products at the artisans’ shops which are filled with linen, leather products, pottery, olive oil and wine.

From San Gimignano, we head over towards Siena

This amazing city which has been designated by UNESCO as one of the World Heritage Sites.

While in Siena we will visit San Domenico, a special church restored several times due to war and earthquakes, known for the relics of Saint Catherine of Siena.

The tour will proceed to the unique shell-shaped Piazza del Campo where you can imagine the Palio horse race, and view the Fonte Gaia and Palazzo Pubblico, which houses the famous frescoes of the “Good and Bad Government” by Ambrogio Lorenzetti.

The sightseeing will conclude with a visit to one of Tuscany’s most outstanding Italian Gothic cathedrals. Between the colorful facade and the inlaid marble floors, this monument to Siena’s destiny will surprise you with its serene beauty.

San Gimignano (above) rises on top of a hill 334m above sea level and is visible from a distance with its many still existing towers. Only 13 towers of the 72 towers from the fourteenth century still survive, and they form what has become one of the most distinctive Tuscan skylines of today.

Legend and mystery surround, perhaps one of the most beautiful medieval towns in Italy, Siena (below). History tells us that it was founded by Senius, son of Remus, one of the two legendary founders of Rome thus Siena’s emblem is the she-wolf who suckled Remus and Romulus. 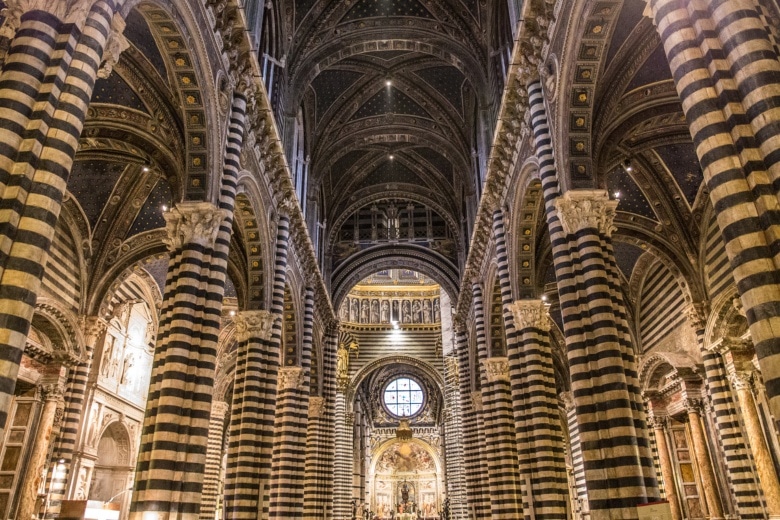