Bike the wall or Climb the tower or do both!!

This tour will be a surprise for most of you! The first stop is Lucca, a Roman town enclosed by its original massive red brick walls which were built between the 16th & 17th century.

The walls are one of the beautiful distinguishing characteristics of the town, which makes this city totally unique because one can easily walk and ride a bicycle on top of them.

If you like to bike we can easily rent them and discover the city biking.

The tour proceeds with a walk or bike along via Finlungo, the main axis of the historic core, which is lined with ancient houses and towers and stops at the Roman Amphitheatre square.

Then explore the house of Puccini (one of Italy’s great opera composers), the church of San Michele and the Duomo of San Martino with its rich decoration, both typical example of Pisano Romanesque style.

With a short transfer through the mountains that separate Lucca from Pisa, the tour will give you a panoramic view of the leaning white tower.

Pisa, undeniably one of the most photographed monuments in Tuscany.  The slant, just under 4°, gives the bellower its the name: the Leaning Tower of Pisa. But did you know there is so much more to see in Pisa?

Before we spend time exploring the Piazza dei Miracoli with the tower, baptistery, cathedral, “campo santo” and museums we will explore the inner city, the Arno River and the famous persons who once resided here, like Galileo.

⇒ Tickets to climb the Tower of Pisa will need to be purchased in advance (you can do that at this website  www.opapisa.it)  Please advise if you want to climb the almost 300 steps to the top, so we can make appropriate time allocations during the tour.

The booking for these tickets is possible 45 days in advance, the earlier the better – they run fill-up quickly. Be sure to bring photo ID if you have a ticket to climb the tower of Pisa. 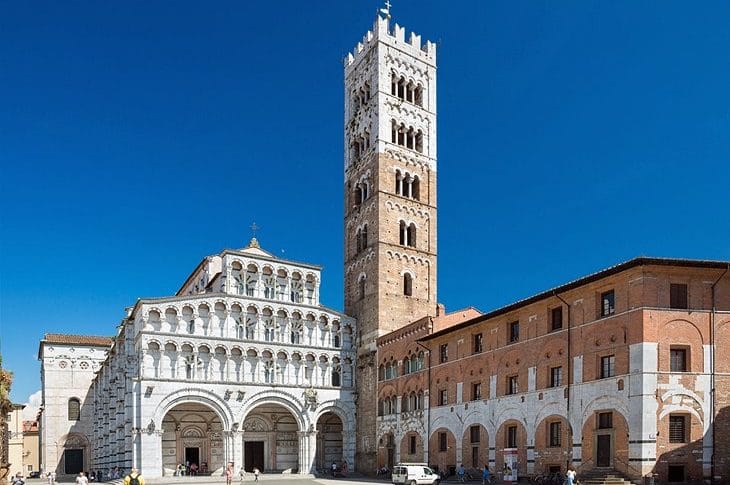 The enchanting walls of Lucca, as the city grew and modernized, surrounded the old town and were maintained which was not the case for many other cities in Tuscany, including Florence. As the walls lost their military importance, the top of the walls became a pedestrian promenade, today one of Lucca’s main attractions. Commonly referred to as the “city of one hundred churches” due to a large number of religious buildings which represent marvelous examples of architectural Italian styles.

Pisa, once served as one of the main Italian maritime republics, until the sand and sediment from the Arno river moved the shoreline towards what is now Livorno and your port of call. From mysterious beginnings, this city is now famous worldwide for its leaning bell tower, Pisa also boasts a beautiful cathedral, one of the earliest known universities (from the 1200’s), over 20 churches and home to many special talents like that of Andrea Bocelli.